Chat with us, powered by LiveChat Baby Scorpions in Your Home? | Responsible Pest Control 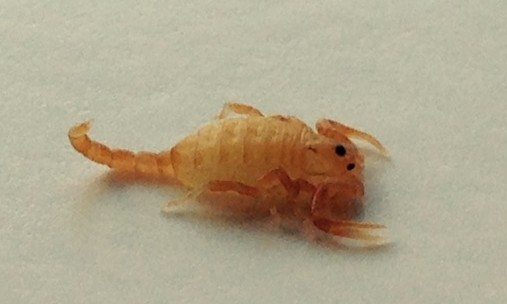 Finding a baby scorpion in the house means there are probably more… Female scorpions give birth to a brood of baby scorpions called “scorplings” who ride on mom’s back for a couple of weeks.

Fun Fact: Baby scorpions DO NOT glow under blacklight!

As you can see, scorplings are a light creamy color and look just like a scorpion but much smaller. Scorplings can sting and pose the same threats as a mature scorpion.

Baby scorpions are a little harder to spot than large scorpions because they’re so small, such a light color, and they don’t glow under black light. But if you find one inside, keep your eye out for more and set up a SCORPION Pest Control visit right away. Because scorpions give birth to a brood of up to 100 scorplings at the same time, if you find one baby scorpion in your home, there’s probably more.

There is a myth going around about baby scorpions being like rattlesnakes (like baby rattlesnakes because they can’t control the amount of venom released with a sting.) According to biologists at Arizona State University, this is FALSE. If this were true it would make baby scorpions more dangerous than adults…but it’s not true. Baby scorpion stings pose the same risks as adult scorpions.

If you find one scorpion, are there more?

Finding a baby scorpion inside your home is a sign of a bigger infestation and means it’s time for scorpion control! You may be asking yourself, “Why do I have scorpions inside of my home?”—and there isn’t one definite answer. Don’t risk getting stung!

Effective scorpion control starts with an initial flush-out using specialized products that are formulated to kill scorpions despite their tough exoskeletons and survival skills. Specialized scorpion control products must be applied in cracks and crevices that scorpions like to shelter in around your home and yard. The best scorpion control is achieved with monthly scorpion and pest control applications because these treatments do not wear off between services!

Scorpions inside your home aren’t just gross, they can also be dangerous. Scorpion sting symptoms depend on the scorpion species and the person’s response to the venom. People with allergic reactions will have more severe symptoms. Don’t live with scorpions another day: Call, text, or email us to set up your initial service and monthly scorpion control maintenance today!