Responsible Pest Control eliminates spiders and the bugs they feed on! Our expert techs sweep down spider webs and treat under first story eves, plus target all harboring and entry spots for GUARANTEED control!

Great service, We’ve been using Responsible Pest Control for months and they’re great. Most recently they came because we were having an ant problem. Since they came I haven’t seen any bugs. They always call to confirm appointments. They’re always on time. They’re really nice. Their customer service is just great.”
Written by: Sarah
Pest Control Service
4.9 / 5 stars 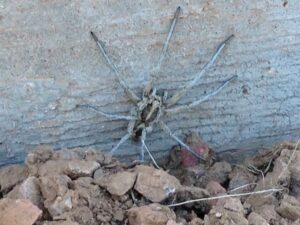 We have TONS of Wolf Spiders in the Phoenix & Tucson Valleys! Wolf Spiders are common household invaders that are often mistaken for brown recluse spiders.

As SCARY as they look, Wolf spiders run away when disturbed. These spiders aren’t a medical threat, BUT bites can cause reactions in some people.

Wolf spiders differ from most spiders, because they DON”T spin webs to catch prey. They’re PREDATORY spiders who roam at night HUNTING for food. (Some species of wolf spiders do build tunnel web burrows.) Wolf spiders DO carry their egg sacs around WITH them. They attach their egg sack to the underside of their bellies.

Wolf spiders are active all year round, and often seen indoors during cooler months: running along walls, in corners, by doors, windows, house plants, and in garages.

Your first Pest Control service is an “Initial Clean Out” to eliminate SPIDERS, and all other general desert pests, currently in your home and yard. This thorough treatment covers the inside & outside of your home, garage, yard AND fence areas!

Our Pest Control Pro’s treat CRACKS & CREVICES where Wolf SPIDERS (& the bugs they feed on) like to hang out, including: in corners, by doors, windows, house plants, in garages, and the interior- exterior perimeters.

After eliminating SPIDERS, and other bugs inside your home, we focus on CONTROLLING pests from the OUTSIDE {before they enter your home}! Monthly or Bi-Monthly exterior perimeter, yard, & fence treatments PREVENT Spiders {and other bugs} from successful entry to the INSIDE of your home!