Chat with us, powered by LiveChat Learning to Live with Scorpions | Responsible Pest Control

Learning to Live With Scorpions 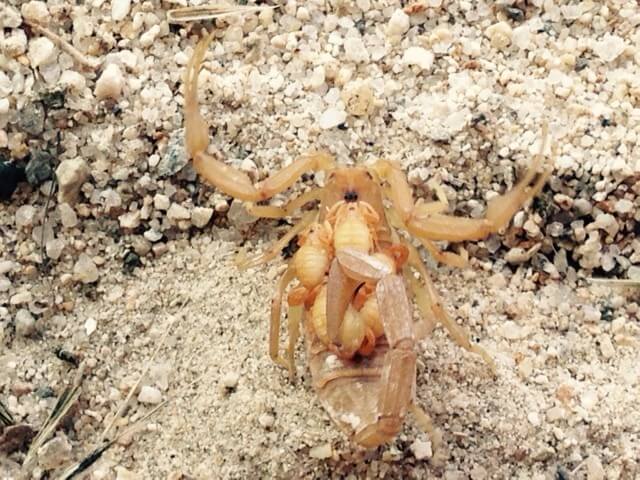 If there’s one thing I’ve learned while living in Arizona: it’s the scorpions’ state and we’re just living in it (I mean…they were here first, so I guess they have the advantage…).

In my eyes, scorpions are at the top of the creepy-crawler pyramid. It wasn’t until I moved away for one year that I realized I have shaped so many of my daily routine habits around expecting to find a scorpion somewhere in my home. I don’t know if this is the usual for every person from Arizona, but in my situation it was the only option.

The first house I lived in as a kid had a minor scorpion problem. My family identified the areas that the scorpions had claimed as their own, so we knew where to take caution when wandering our home. Unfortunately, one of those areas happened to be the closet in my bedroom. Let me tell you, picking up a shirt off the floor and realizing a scorpion is clinging on to the bottom of it is not a pleasant thing to experience while getting ready for school at 7am (or ever). Other than that area of my closet, we occasionally found them in other areas of the house. So, lucky me, I got the worst of it. However, this was nothing compared to what was to come.

In 2010, my family moved into a house that we built in a small town outside of Scottsdale. It was a beautiful house built in a lot surrounded by desert, overlooking the mountains and valley in the distance. This sounds nice, but we must have built this house on sacred scorpion ground. Every scorpion in Arizona was out to get us. I’ve heard that building a new house can stir up the wildlife around it, but this was nothing like what I expected. Without exaggeration, we found at least 10-15 scorpions in our house weekly. This changed up the way my family functioned in everyday life. There are different ways that you can adapt to having scorpions taking over your house, and I think I’ve become accustomed to all of them.

Living with scorpions is stressful! Life is better without them… Get rid of them with the Scorpion Control experts at Responsible Pest Control and RELAX – We’ve got this!

These habits, always wearing shoes, shaking everything out and blacklight inspections, might not seem that abnormal to another Arizona native. I learned they were slightly out of the ordinary while living out of state for a year. This is the same time I learned that the threat of getting stung by a scorpion is not even on the radar of people who don’t live in our desert state. When I was asked why I always wore shoes or always shake things out, and I respond that I’m simply making sure there are no scorpions I could disturb and risk getting stung by, I got looked at like a crazy person. “Scorpions???” People would ask with such confused looks. It’s just not something they have to worry about.