Chat with us, powered by LiveChat Living in Scorpion Territory - Responsible Pest

When you live in Phoenix, you’re living in scorpion territory. That’s simply a fact that comes with living in the Arizona desert. During the winter, scorpions are less active and can be found indoors. In the summer, scorpions are actively hunting for food or a mate and can be found inside and outside. Scorpions like to shelter in dark cool places with an air flow, like cracks and crevices inside block fence walls or under palms tree bark.

Living in scorpion territory doesn’t mean you have to live WITH scorpions in your home. If you have scorpions inside your home, contact an experienced scorpion control professional to evaluate the situation and recommend an effective treatment for you.

The Phoenix, Arizona area is in the Sonoran Desert, and scorpions are native to desert environments. If you live in or near Phoenix, chances are you’ll run into scorpions on your property or in your neighborhood sometime. You can refer to recent maps to see where scorpions have been reported in the Phoenix area.

Arizona is home to the Arizona Bark Scorpion, which the most lethal venomous scorpion in the United States. 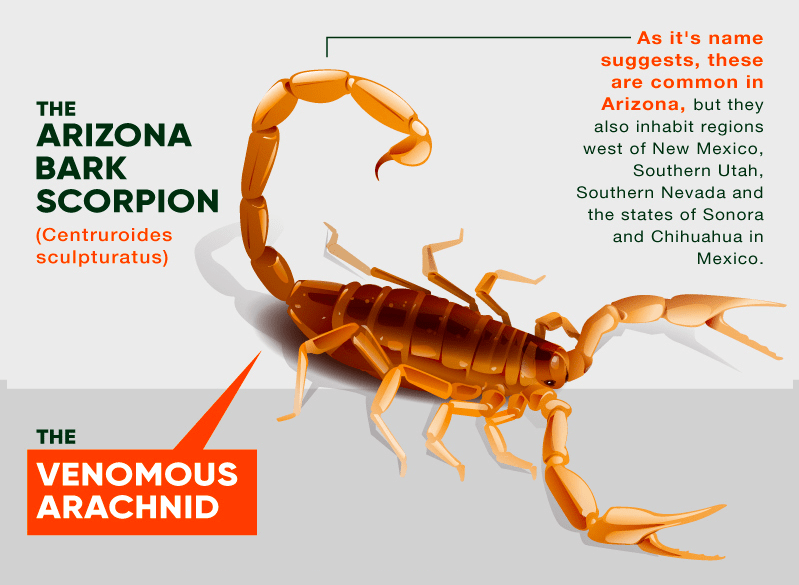 You can recognize an Arizona bark scorpion by the following: 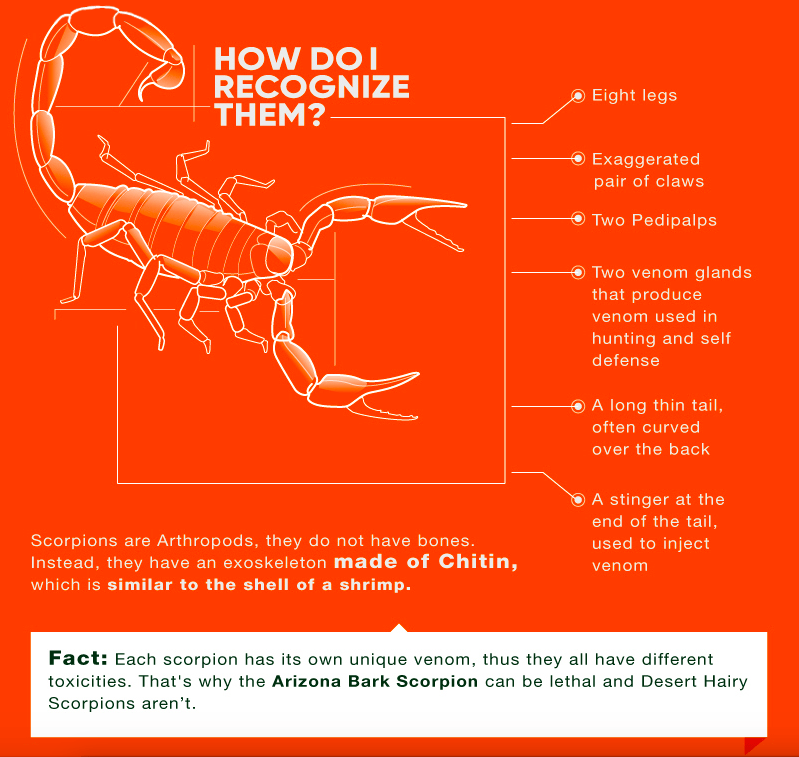 When you come into contact with a scorpion, and you’re not sure which species you’re facing, exercise caution and treat it like it is venomous.  Arizona bark scorpions are nocturnal and capable of climbing textured surfaces, so be aware that you can find them on walls, ceilings, in trees and high on shelves and furniture. This includes brick walls, stucco walls, wood paneling, and drywall. Scorpions can also survive underwater for hours, so it is possible to find one alive in your swimming pool, sink, bathtub, or toilet. Arizona bark scorpions tend to gather in groups (especially during cooler months) so when you see one, others may not be too far away.

Prevent Scorpion Infestations in your Home

Arizona Bark Scorpions are attracted to cooler, moist areas that have sufficient airflow. Specialized scorpion control treatments treat all cracks and crevices around your home and yard to eliminate scorpions inside and prevent further infestations. Another way you can reduce your chance of scorpion infestations around your home is to seal up any holes or cracks in your foundation, sidewalks, block wall fences, and exterior walls. You should also repair and replace old door sweeps and weather stripping around windows and doors.

Arizona Bark Scorpions eat crickets, cockroaches and other insects. You can help prevent infestations of pests to help discourage a scorpion infestation. After all, scorpions are predators that follow food sources.

A few places where you might find Arizona bark scorpions inside your home include:

How & When to Hunt Scorpions

The Arizona bark scorpion survives 12 months out of the year. Usually, scorpion season begins when the temperature hits about 70 degrees Fahrenheit, which is usually in the early spring. This is when scorpions become most active. 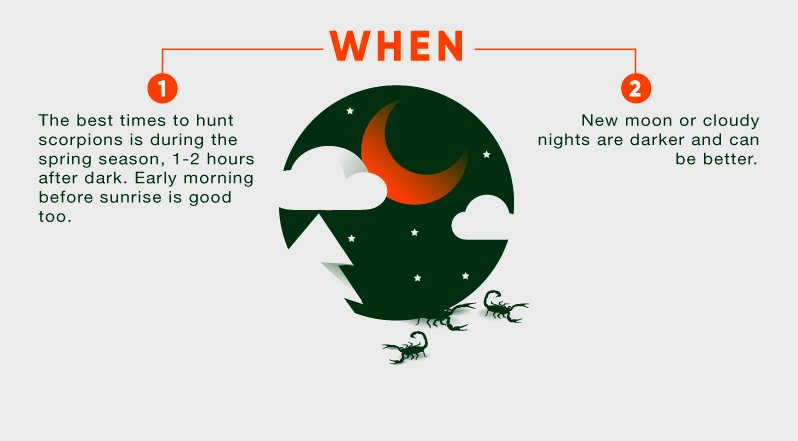 You can hunt scorpions around your home. Generally, you’ll find them in the dark and just before sunrise with a black light – flashlight. New moon and cloudy nights tend to be the best for hunting scorpions because they’re the darkest.

When you’re searching for scorpions in your home, don’t forget to look up high. As we mentioned, Arizona bark scorpions climb. Shine your flashlight high on walls and ceilings, down by the concrete foundations, and on block wall fences. Instead of using a regular flashlight, use a black light. 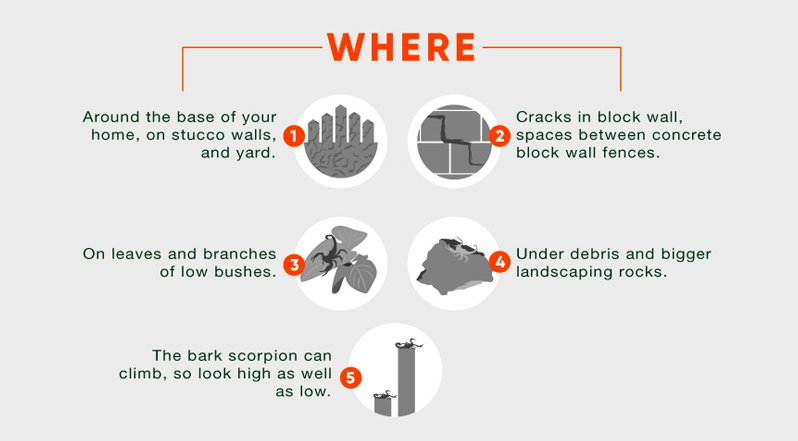 Arizona Bark Scorpions glow under black light and look almost fluorescent. Pick scorpions off walls, ceilings, block wall fences, branches, and out of debris piles with needle nose pliers. Place them carefully in jars and screw the lids shut. Using a glass jar to collect scorpions prevent scorpions from climbing out because they can’t climb the smooth glass surface. When you are hunting scorpions, wear thick gloves to prevent stings. 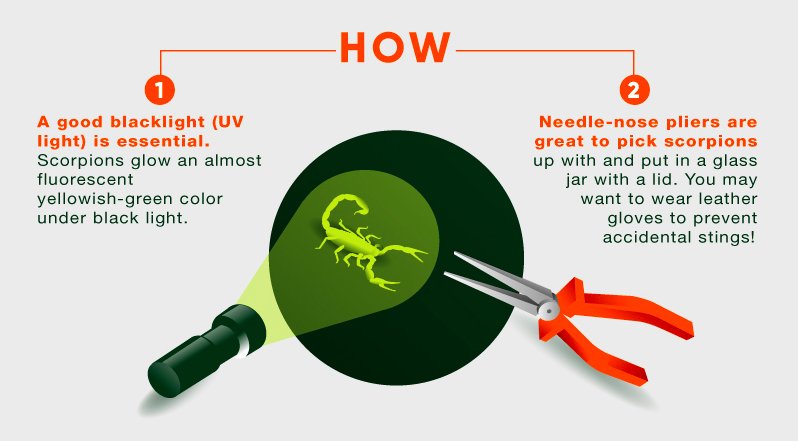 If you do not feel comfortable killing the scorpions yourself or your infestation is too large for you to handle on your own, call a professional pest control company to handle the job. An experienced scorpion control professional will not just kill scorpions on contact, but they prevent scorpion infestations in the future.

Scorpions aren’t like other kinds of pests. They can’t be controlled with general pest control like other types of bugs. Scorpions need to be treated with specialized products formulated to be effective specifically on scorpions.  There are several over the counter “scorpion killer” products at home improvement stores but don’t be fooled, this may be best left to the professionals. Over the counter products only kill scorpions when they are sprayed directly. They DO NOT keep killing or repelling scorpions after they dry.

Scorpion populations need to be managed with compounds specifically formulated for scorpions. Unlike other pests, which can be managed with less potent compounds, scorpion control involves potent compounds mixed with extended exposure agents. This is because scorpions tend to hide out in nooks and crannies throughout homes and yards. Effective scorpion control keeps killing scorpions even after treatments have dried and keeps working for about a month. 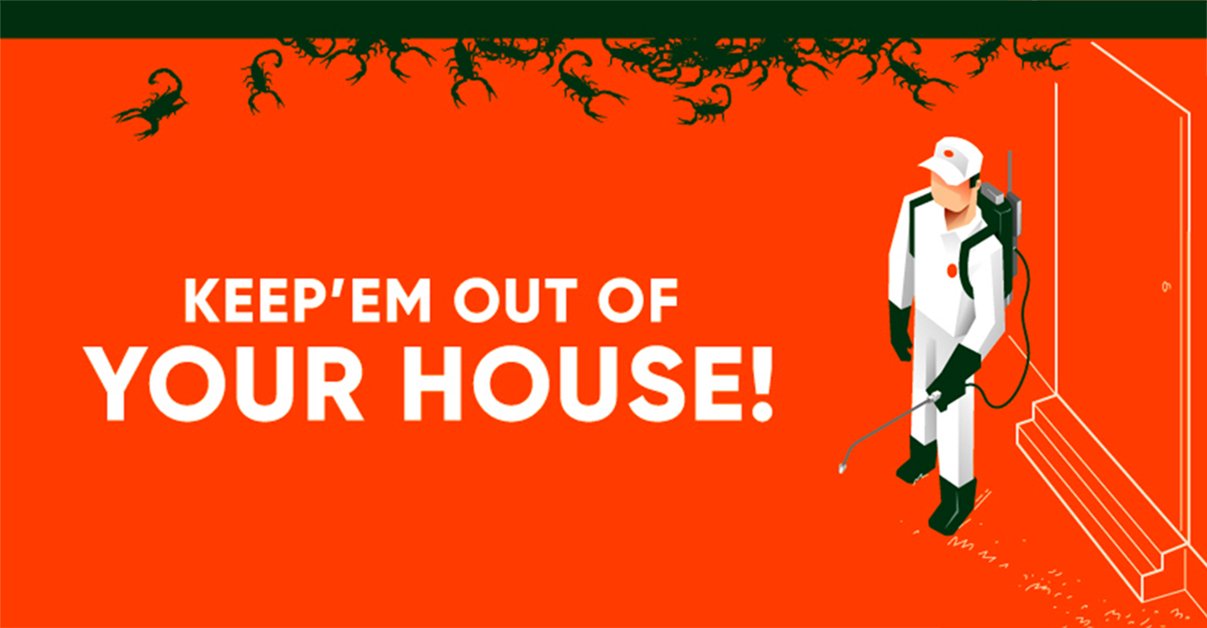