Arizona Bark Scorpion in Phoenix caught in the middle of a favorite meal…. Live Cricket! Scorpions eat lots of insects but they LOVE crickets & roaches.

The occasional cricket or roach may seem like a harmless pests, but consider this… In Phoenix Valley areas Scorpions feed on many insects, but they hold a special place in their heart just for CRICKETS and roaches! Scorpions prefer crickets, but also love a big juicy roach, making pest control for crickets and general pests an important part of Phoenix Valley Scorpion Control for the home or office! 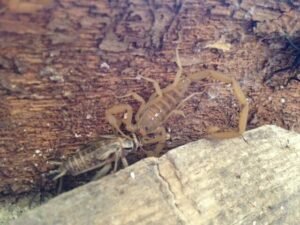 Having insects like crickets & roaches (or an occasional scorpion) around your home or office will attract more SCORPIONS!

Scorpions food sources, like crickets ROACHES and other insects, can actually attract SCORPIONS into your yard, and heaven forbid… Your home. What most people don’t know is that scorpions actually attract more scorpions too! They use pheromones and vibrations to attract other scorpions to mate or nest! 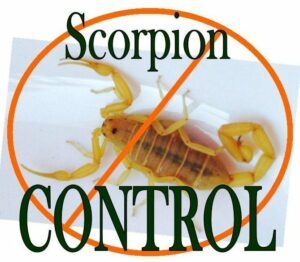 PREVENT scorpion problems around your home – Schedule your initial clean-out and monthly Scorpion Pest Control service today! The initial clean out is a heavier and extremely thorough treatment that targets scorpions and general pests ALREADY in your home and yard.

Monthly maintenance keeps an active barrier that kills scorpions (and general pests) around your home and yard that keeps them away GUARANTEED. Monthly scorpion pest control is recommended for best scorpion control because it does not wear off between services like other service plans do.